U.S. stocks have experienced a strong recovery in 2019 but the increase in volatility the last several months is a concern.  If stock indexes can hold current gains, they will deliver solid double-digit returns for the year despite sputtering trade progress with China and political turmoil in Washington DC.  While political developments can lead to uncertainty, such as the current impeachment inquiry, the market does not appear to have been impacted by developments at this point.

You would think stocks would be under massive selling pressure based on the daily reporting by many financial news outlets.  The current environment is one of the better examples of why it is important to pay attention to what stocks are doing versus what commentators think they are going to do.  Right now, stocks are telling investors the economy can handle the trade war process and any weakness in the economy is temporary.

One of the primary reasons stocks have rallied in 2019 is the Federal Reserve’s reversal (from raising to lowering) on interest rates.  Monetary policy is always one of the most important factors driving the direction of stocks.  What makes the U.S. different from other countries (Japan, Europe) with accommodative monetary policy is that we have also implemented Fiscal policy (tax and regulatory reform).  Lower corporate-tax rates have provided U.S. companies more financial flexibility; regulatory reform lowers costs and has helped stimulate new business formations.  Growing new businesses is an important element that has been slow to develop out of the 2008 recession, as shown in the following graphic 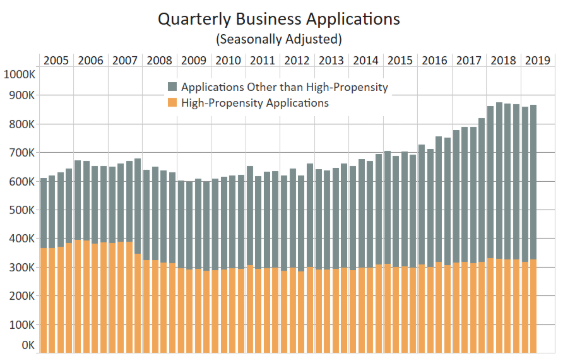 Small businesses are an important element in our economy and the increase in business formations is a strong driver for ongoing economic growth.

The global economy remains challenging.  Germany is on the brink of a recession and Japan’s economy only grew 0.8% in 2018.  Over the summer Mario Draghi, the outgoing head of the European Central Bank, reminded government policy heads of the importance of fiscal measures in spurring economic growth.  European Union officials are dealing with a lot of skepticism over their mandates and controls for member countries on immigration, labor, tax, etc.  Brexit is a real-time example of the frustration voters have with the European Union.

Back in the U.S. there are several additional factors driving our economy.  First, our move to oil independence has significantly lowered energy costs and eliminated our dependence on foreign oil.  Fiscal policy, in the form of reduced taxes and regulation, is another boost to the U.S. economy.  An innovation renaissance is also spurring new business formations and impacting our quality of life.  As an example, the incredible improvements in medical devices and genetics has delivered a measurable impact on the survivability of certain cancers and researchers are hard at work to try and cure more diseases.

Regarding news in September of a shortage of cash in overnight lending markets between banks.  The run on cash appears to have been the result of corporations pulling cash from money market funds to make quarterly tax payments on the same day banks had to settle trades from a $78 billion U.S. Treasury bond auction.  The jump in rates was at the “tail” of the market. Most trades only experienced slightly higher rates.  On balance, there was not a serious system-wide shortage of reserves.  There remains approximately $1.4 trillion of “excess reserves” in the banking system.  It is also believed the increased reserve requirements by banks as a result of Dodd Frank may have played a roll.  Specifically, the Liquidity Coverage Ratio (LCR), which forces banks to hold enough liquidity to last a month in a significant financial/economic crisis.  The Fed has responded by cutting the size of its bond portfolio and is actively considering additional policy action to make sure this critical part of our financial system works smoothly.

On the topic of the constant calls for a recession I suggest economies don’t fall into recession because they have been expanding for longer than usual.  They usually contract because the Federal Reserve raised interest rates to high, which chokes off the economy, or a black swan shock, which is an event that cannot be predicted in the future but disrupts financial markets.  We know the Fed is in an easing mode, lowering rates and buying bonds, like other central banks around the world, which will likely support a continued stock market rally.

Still, many leading stocks have experienced significant corrections over the summer and into the fall.  Further weakness would signal the likelihood of additional stock market declines.  We may not have to wait long for a near-term signal regarding the direction of stocks.  Earnings season has officially kicked-off and if the report from JP Morgan is any indication, it may surprise to the upside.  I’ll be keeping an eye on the recovery from leading stocks during the Q3 earnings season.