After a swift and intense decline in October, U.S. stocks are trying to rally but face renewed selling pressure in November.

One of the current challenges is the performance of international stocks.  The economic recovery and central bank policies of Europe, Japan and China continue to lag results in the U.S.  This divergence has created a significant valuation gap and instead of international stocks catching-up to the U.S., investors may be looking to revalue U.S. stocks lower.

Here is a look at the Price to Earning (P/E) and Price to Book (P/B) ratios of international (EFA) and emerging market (EEM) stocks compared to the S&P 500 (IVV).

As the data above shows, U.S. stocks are trading at a premium to the rest of the world.  The P/E ratios above are calculated using 12-month trailing earnings.  If 12-month forward earnings estimates were used the P/E ratio for US stocks would be significantly lower.  Strong earnings growth projection for U.S. stocks explains why there is such a large difference between trialing and forward P/E calculations.

The risk to U.S. markets is a reduction in the P/E and P/B ratios through lower stock prices despite a healthy U.S. economy and corporate earnings environment.  Stocks could trade down another 10-20% from current levels to narrow the gap but U.S. stocks should be able to maintain their independent valuation despite lower growth and valuations in other parts of the world.  This would be based on continued sales and earnings growth.  High growth environments are often reward with premium valuations.  In terms of opportunities in international stocks, eventually they may represent an attractive investment opportunity but as a group they appears to have more economic work to complete before they can stage a strong recovery.

Interestingly, leading growth stocks have held-up pretty well during the selling this past week with the number of stocks reaching new highs for the NASDAQ well above lows back in October. 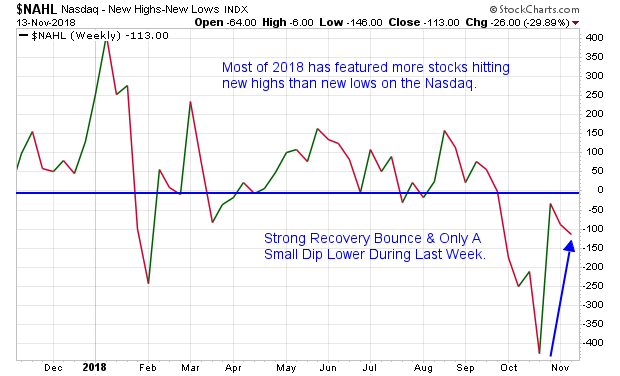 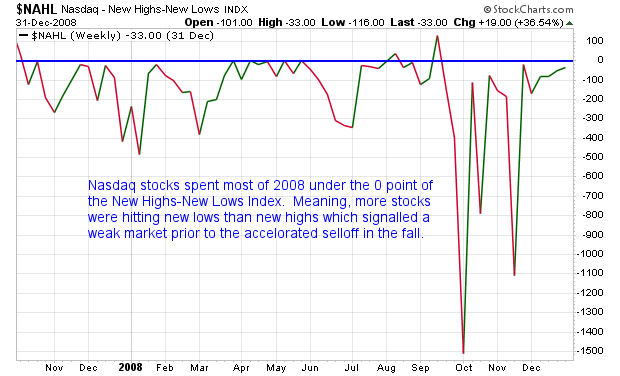 It will be important for the New Highs-New Lows index to move back into positive territory.  The performance of leading stocks is an important sign of when to potentially take defensive action.  If high-growth stocks are holding up in a market correction, the likelihood of a bear market is lower.

End of This Cycle

Some commentators are suggesting we are at the end of this cycle.  However, they may be failing to recognize that in this cycle we spent the first 8 years in repair mode and only recently began a phase of strong economic growth.

Another clue to the health of the overall environment can be found in credit markets.  Some commentators have suggested the flat yield curve is a sure sign of a pending recession.  What they may fail to realize is this is a common occurrence for years leading up to a recession as short-term rates move higher while long-term rates remain somewhat anchored due to a deflationary trend cause by globalization.  We are only one-year into a rate rising process and remain at very low rates.  Some rate sensitivity has been reported which may help The Fed pause at some point in 2019.

High-yield bonds are holding up well which is something we would not expect if we were moving towards a change in the market cycle. 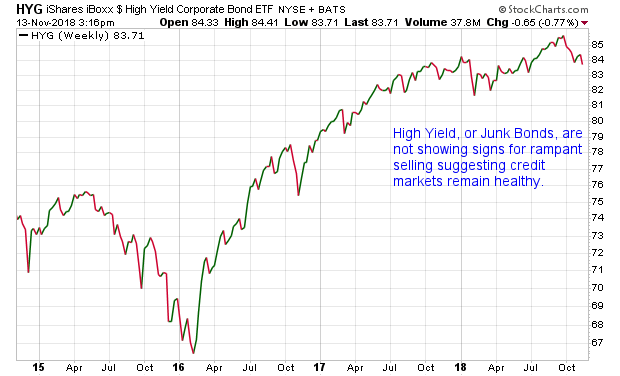 The stock market had a strong day on November 7th and some observers believe there is a reasonable chance of an infrastructure bill passing which should be well received by the market.

In terms of the international trade, progress has been accomplished.  However, China and the U.S. have very different approaches, definitions and attitudes on the subject which could mute economic growth next year if an agreement is not reached.

There are always risks and “what if” considerations when monitoring market cycles.  On balance I believe we are still in an expansionary phase economically which could last longer than many people anticipate.  There are risks and conditions could change quickly but in total I believe the current selling is corrective in nature, and even if we see additional declines, I believe stocks will resume the current uptrend.