One of the strategies I developed for my investment management services is closely related to what has been called the “All Season” or “Permanent” portfolio.  The idea behind this type of investment approach is to deliver a low volatility, reasonable rate of return that can weather any type of market environment: bear market, inflationary, stagflation, etc.  This investment approach has been featured by many different successful investors including Ray Dalio, Cliff Asness, & Harry Browne.  I studied their work and developed my own version.

What make the approach work is using high volatility but low correlated investments.  Take gold for example.  It’s long-term rate of return is mediocre, especially given its high volatility.  What can make gold glimmer, however, is its historically uncorrelated nature.

I recently heard a popular investment newsletter podcast suggest this approach has not worked since 2009.  The shows presenters claimed that correlations have risen, and the strategy has not been performing as expected.  I was surprised by the claim because it has been performing exactly as expected, both as a stand-alone strategy and also as a multi-model approach.

Just to be sure, however, I tested correlations from pre-2009 through 2018 and found very little evidence correlations have risen.  I am not sure if they were mis-informed or just trying to sell more newsletter but I though it was a disservice to highlight “All Season” and “Permanent” portfolio creators and then suggest the approaches don’t work anymore.  So let me be clear, my version of the “All-Season” and “Permanent” portfolio continues to deliver low correlations between asset classes.

Here is a look at the matrix I created comparing correlation of the four asset classes in my approach.

My strategy has not experienced a high degree of correlation and the numbers above suggest the environment has not been one of high correlation.

It is important to understand correlations change.  In my test I looked at 60-day correlations, that is, the price movements between the two assets over rolling 60-day periods going back about 12 years.  As you can see from the examples below, correlations change a lot during short periods, which is a good reminder why a long-term investment perspective is needed.  Perhaps the newsletter writer in the podcast happen to peak at the numbers during a period where correlations moved higher.  As graphics below illustrate, correlations between gold and stocks , for example, do bounce around. 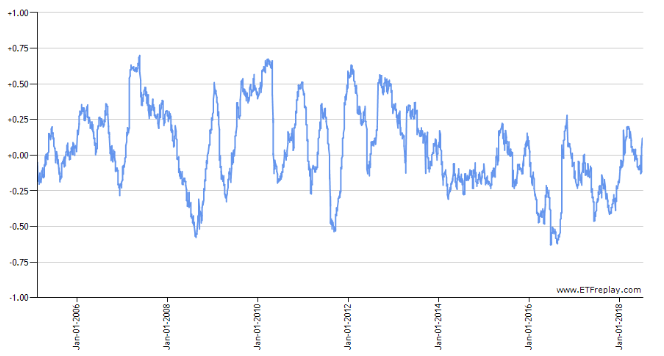 If we extend the rolling period to 120-day, we see correlations smoothed considerably.

I refer to my strategy as the Cycle Strategy. It is one of the most conservative investment strategies I manage and compared to an all stock benchmark like the S&P 500, is has experienced an incredibly low correlation of +0.36% over the last few years.  Meaning, approximately 2/3 of the time the strategy does not move in the same direction as the S&P 500. The maximum draw down is approximately ½ the S&P 500 while also capturing approximately ½ the return.  (Statistics courtesy of ETFReplay.com, Last 36 months through July 11, 2018)  I am also able to provide the same data going back to 2009, which looks terrific.

Three of the four asset classes in this strategy can be extremely volatile at times.  Yet, more often then not they experience their volatility at different times.  Therefore, as a group they can be less volatile.