2018 has turned out to be a completely different investing environment from 2017. I have been reminded of debt market issues I thought I would not to have to address until 2019-20, beginning with interest rates.

Here’s a look at the current yield curve for U.S. Treasury Bonds which represents the rate of interest for different bond maturities.

The current Treasury yield curve shows short-term rates just over 2% for two-year maturities and just over 3% for a 30-year bond! 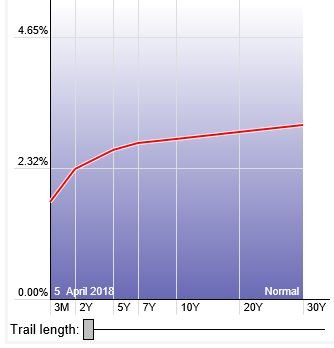 Here is what the Treasury yield curve looked like prior to the 2000-2003 recession, where short-term rates were above long-term rates which created what is referred to as an “inverted yield curve”. 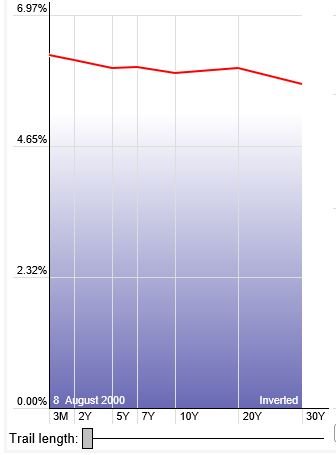 Prior to the Great Recession of 2008-09, the Treasury yield curve was flat and at much higher rates across maturities, compared to today’s levels. 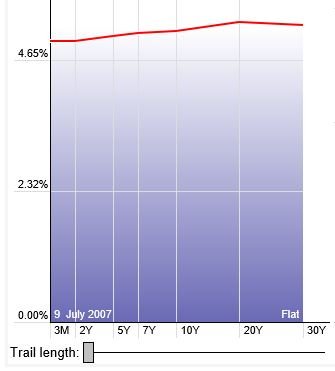 The question investors should ask is, what besides the Fed could cause interest rates to rise in the current environment?

In addition, existing government debt must be refinanced as it matures. As interest rates rise, the interest expense to the U.S. government increases requiring a larger amount of the federal budget (which may have something to do with why President Trump pushed some infrastructure spending to states and private partnerships). As of 2017, it was estimated that 70% of Treasury debt held by private investors will need to be refinanced in the next five years. (The Fiscal Times, June 7th, 2017, Lawrence Goodman) Much of the current U.S. debt was issued when short-term interest rates were near zero due to quantitative easing (QE). It wasn’t until 2016 they started to creep higher; the biggest move in short-term interest rates has happened in the past 12 months.

There are other potential challenges, recently highlighted by JP Morgan CEO, Jamie Dimon. He reminded investors in his annual letter to shareholders that rates may move higher than expected, as the Fed and other holders (China) move to sell more Treasuries (QE unwind, Trade War Retaliation), at a time when market structure (a reduction in market makers – broker/dealers making a market for specific stocks or bonds due to financial reform and other factors) may not be able to provide the needed liquidity. As asset prices adjust to a not so positive environment (swift moving interest rates), declining stock AND bond prices could lead to a market panic (which may end up being a terrific buying opportunity).

There is risk too in the Trump tax plan.  A reduction in federal government revenues would be a disaster further aggravating our already enormous deficit.  The administration is counting on tax cuts to stimulate economic activity, increase employment and wages, to make up the difference and then sum.

Other aspects of the current environment remain attractive. Throughout the 20th & 21stcenturies the stock market has moved to higher levels after severe market events. We may not see the Dow hit 30,000 before the next bear market (which is a shift from my previous view) but if long-term trends continue we are very likely to see it within the next decade.

The current selling in the stock market has been a typical correction. The combination of interest rates on the rise, big tech snafus (Facebook, Uber, Tesla) on high valuations, trade jabs between President Trump and Prime Minister Xi, it’s not surprising stocks have struggled. There are plenty of positive trends that even if the correction deepens, should help stocks find their footing.

We are about to enter Q1 earnings season which could be a positive diversion. Analyst expect strong sales and earnings growth which could provide the cover needed for current company valuations to push higher, especially if guidance remains strong. A record number of S&P 500 companies are issuing positive earnings per share guidance for Q1 (according to FactSet), on the back of steady and/or improving economic numbers. Combined with a renaissance in technology and consumer services, there are a lot of reasons this market has more upside.