This was one of the most fascinating weeks in my career as a portfolio manager. Stocks were under aggressive selling pressure most of the week but ended the session on Friday recovering most of the days’ declines. Especially encouraging was the impressive advance Friday from the tech sector and small caps. Overall trading on Friday was supportive but action for the week is another reminder to investors, we have entered a new phase of increased market volatility.

Here is how the S&P 500 traded on Thursday and Friday. 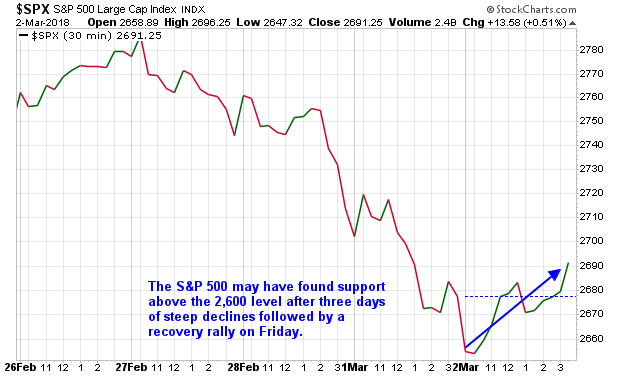 The biggest issue at hand is not President Trump’s steel and aluminum tariff announcement. Time will tell how the policy unfolds. The biggest challenge has more do to with the new Fed Chair, Jerome Powell, providing both houses of congress his first testimony. Unlike prior Fed chairs, Chair Powell appears less concerned about what Wall Street thinks and more focused on executing his monetary policy. Here is what one of my Wall Street trading contacts had to say about the Donny & Jay Team…

“If you think Donny is going to pull back on this major announcement just because the mkt sells off a bit – think again……Like Jay Powell – Donny will not be led around by the nose when traders on Wall St. throw a hissy fit.” Kenny Polcari, Oneil Securities

The market was already anxious and vulnerable so testimony from Chairman Powell on interest rates, which are headed higher, and import tariff policy by President Trump, is bound to rattle markets. From elevated levels in a prolonged bull market, stocks are vulnerable to steep corrections.

I would suggest the interest rate and inflation dynamic is what is driving markets today. My ongoing research has caused me to change my view of whether an increase in rates from current levels can negatively impact the economy and stock market. I have suggested that interest rates rising from such low levels are not likely to have a negative impact our economy or the stock market until they move past normal levels. Most rate hikes in the past that have slowed the economy have occurred at much higher levels. However, a closer look at three different factors facing most central banks in the world has changed my thinking.

Collectively these three factors represent a massive impact on the bond market. Central bankers and treasury officials do have options for managing these challenges. The Fed will increase their available tools after a few more hikes in the Fed Funds Rate. The playbook seems pretty clear for 2018, the Fed lifts the Fed Fund Rate to around 2% while the economy strengthens on Trump’s economic policies. 2019 is where it will get interesting and the stock and bond markets are already anticipating the environment 6-9 months in the future.

For reference, here is a quick look at the Prime Lending Rate, Consumer Price Index and the S&P 500 over the last 20 years. 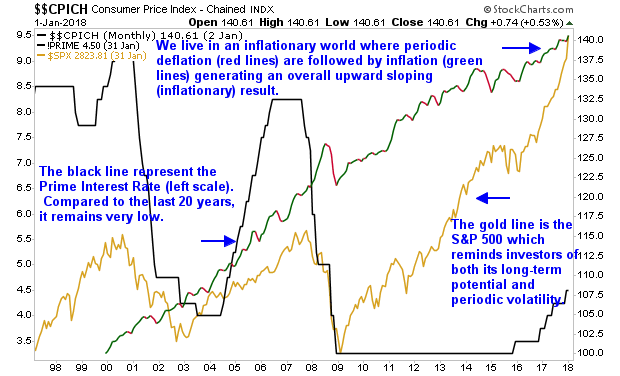 Much of the recovery from 2008 involved bond buying by central banks: Bank of Japan, European Central Bank and the Federal Reserve. The Federal Reserve was the first to start selling bonds from their balance sheet last fall. Keep in mind, the bonds on a central bank balance sheet are in addition to bonds a treasury department may issue to fund government operations. Central bank balance sheet bonds are already issued bonds, treasury bonds are newly issued bonds. As I have communicated many times, the world is swimming in debt from decisions made during the last financial crisis and a consumption driven economy.

Japan has even hinted they may stop purchasing government bonds soon. Once a central banks shift to selling bonds from their balance sheets, while government treasuries continue to issue new bonds to fund operations, the supply of bonds very well may push prices down further and interest rates higher. Some traders are expecting the U.S. Treasury to issue substantially more 30-year bonds around this time next year. Combined with ongoing sales from The Fed (which holds several trillion dollars’ worth), some traders believe bond prices will have to be much lower to get new bonds sold, driving interest rates higher. Higher interest rates mean government debt servicing costs are going to rise which will increase the deficit (which shows no end in sight). As I have said before, I would not be surprised if the next crisis comes once again from the bond market. What policy makers are dealing with now is the other side of Quantitative Easing, the strategy used to address the last financial crisis.

The White House is hoping economic growth accelerates and tax revenues increase to cover costs and reduce the deficit. If the economy grows too fast The Fed will be under pressure to raise short-term interest rates, where most of government debt is financed. This will cause debt servicing costs to shoot up. This is another concern I have mentioned in prior commentary. Debt servicing costs as a percent of the Federal Government expenditures is a risk to the economy. Unfortunately there are not many good options for policy makers.

Markets have pretty much priced in 3-4 increases in the Fed Funds rate for 2018. Now the attention is focused on 2019. It should be clear President Trump and Fed Chair Powell have a very delicate balance to maintain but their style of communicating their policy is decidedly different than previous administrations. They can’t really afford to let markets dictate their moves (many analysis and commentators believe The Fed waited to long to raise rates). They have to take actions based on what they believe will be the best path for navigating the U.S. economy through the current challenges.

The key appears to be maintaining a steadily improving economy of moderate GDP growth around 3%. Here is where Economic Cheerleader Trump may run into problems. The harder he pushes for 4% growth the more trouble he may create in debt markets. The good news here is innovation is alive and well at a time where money is plentiful, financing relatively cheap and government policy is generally favorable.

From a portfolio management perspective, there are clearly better areas of the stock market to be invested in right now and even some undervalued assets to consider bringing into portfolios to reduce risk levels. 2018 appears to be delivering a market where investors may be rewarded for making the right changes to their portfolio. Let me know if you are interested in discussing how I handled the 2008 bear market and how I am addressing the current set of challenges and opportunities.