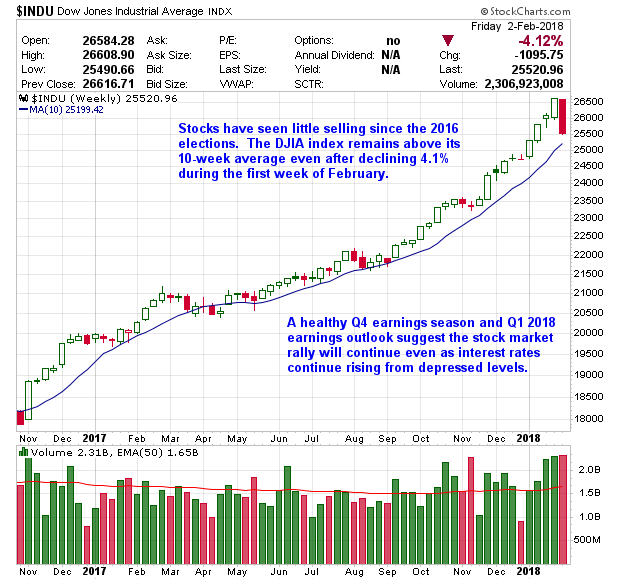 After an outstanding 15-month stock market advance, last week stocks experienced a significant pullback.  The S&P 500 declined 3.9% but all three major U.S. stock indexes remain in positive territory so far in 2018.  After outstanding performance in 2017, U.S. stocks started 2018 on an even more accelerated run with the Dow Jones Industrial Average gaining 7.6% during January, before last week’s pullback.  The stock market rally needed to slow down.

In terms of earnings, Factset reports as of February 2nd approximately 50% of the companies in the S&P 500 have reported actual results for Q4-2017.  Of those, 75% are reporting actual earnings-per-share above estimates compared to the five-year average.  In terms of sales, 80% are reporting actual sales above estimates; the sales and earnings health of U.S. publicly traded companies appears to be good.

The likelihood of additional interest rate hikes in 2018 may have been the trigger for last week’s stock market correction.  Jerome Powell is the new Fed Chair and futures markets are expecting another 75-basis point increase in Fed Funds in 2018, which would bring the rate to around 2%, still below the historical average.  Investors also saw declines in bond prices last week as the 10-year Treasury yield shot up to 2.92%. 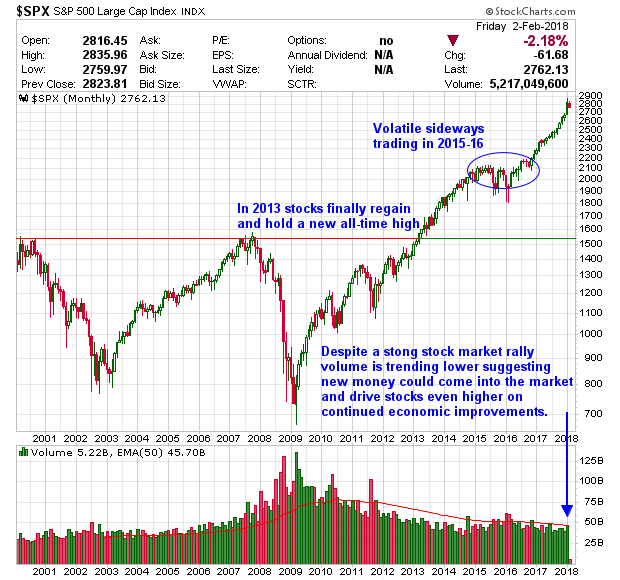 The continued improvement in economic numbers along with the overall optimism and rapid pace of innovation currently underway could suggest we are a long way from interest rates causing a sustained decline in the stock market.

Don’t be surprised if stocks are up big on Monday.  We could see more selling but a lot of cash remains on the sidelines and some investors have been looking for an opportunity to enter this market; one of the reasons stocks have not given much ground since President Trump ushered in a new set of economic policies aimed at broad sustained economic growth.

We have a combination of conditions that are conducive to a continued market rally: 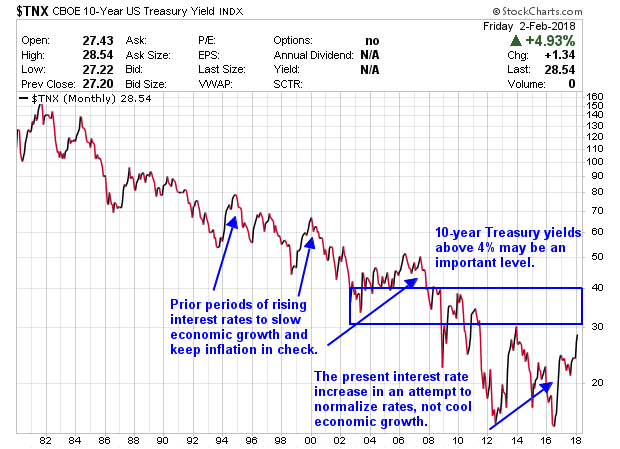 Unlike prior market cycles, this one may not last as long as those previously for a couple reasons.  First, this expansion comes on the heels of a recovery that started 8 years earlier.  Second, a tremendous amount of debt was created in the U.S. and globally as the primary policy for recovering from a debt crisis.  If you are shaking your head, you should be.  Eventually we will pay a price for policy mistakes used to address the 2008 financial crisis.  Until then it is a race between economic growth and debt growth.  The next crisis could very well come from a country needing to restructure their debt.

In terms of interest rates, it appears we have some breathing room.  The 10-year Treasury yield remains well below levels of the last 20+ years.

In terms of short-term rates, if the Fed Funds rate were to rise above 3% the economy should be doing exceedingly well.  However, government debt funding is more sensitive to short-term rates, so policy makers are likely to take funding costs into consideration as they move rates higher.  Fortunately, other broad economic factors appear to be holding inflation in check which should allow The Fed to keep short-term funding rates at or below normal levels.

Until The Fed has turn up interest rates to a point of slowing the economy, the stock market is likely to continue rallying…there are amazing investment opportunities in the next generation of biotechnology, materials, software, and much, much more.  It is truly an exciting time to be an investor which is another reason I believe more money will find its way into the stock market over the coming years.

Please let me know if you are interested in learning more about investment opportunities from innovations in finance, travel, technology and more in a risk-managed, proactive approach.