NOBODY knows what is NEXT

NOBODY knows Jack or Jill about what is next for markets or the economy, I don’t care what people say or how convicted they are in their belief. Investors that make big investments on their best guess (or forecast, projection, thesis, etc.) are having a very tough go of it in this market.  Very popular mutual funds and hedge funds have suffered big losses in the last year and many have closed.  When central bank intervention dominates asset markets traditional methods like fundamental and technical analysis do not work well.  Eventually market forces correct imbalances and policy makers hope they can correct some of those imbalances before they self-correct.  All we really know is what we can observe right NOW.  Even history can’t be relied upon to guide decisions because, while this time may not be any different, the timing may be very different.  Meaning, markets can stay disconnected from reality for much longer than anyone expects.  Then again, they could self-correction tomorrow.  Or, they could move in very unexpected direction.  For example, not many people are suggesting Treasury yields will rise the balance of 2016 but it could happen especially if the Fed does end up raising rates throughout the balance of the year.

One way to address all the market uncertainty is to deploy several different investment strategies with various levels of risk aimed at navigating different outcomes over the long-term.  That is the approach I have developed at Dightman Capital.  It is really quite straight forward and uses basic index oriented asset classes in unique combination.  One set of strategies maintains exposure to asset class but combines the investments in very unique ways.  Another strategy uses a timing mechanism designed to avoid sustained market declines.  The outcome when these strategies are combined may represent an overall lower correlation to the stock market, lower downside volatility and a higher overall risk-adjusted return.

Consider international stock markets that are either flat or down since 2008.  Despite massive policy intervention designed to lift markets, international stocks remain a challenging investment.  What worked in the U.S. (QE, ZIRP) clearly did not work in many other countries.  Of course, some countries also implemented austerity measures and Japan is in a completely different league overall.  Here is the thing, despite 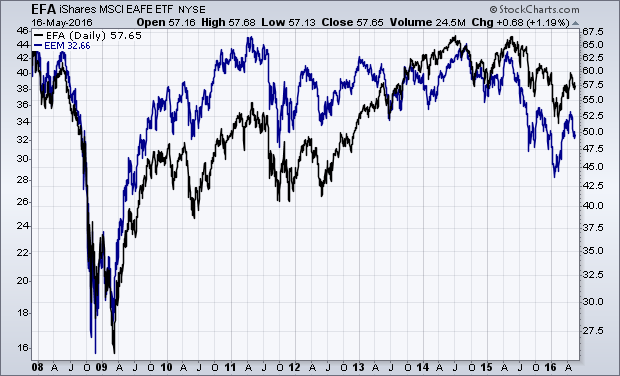 being “cheap” at times it has been difficult to generate gains from international markets during the last 8 years!  There have been periods where international markets outperformed U.S. markets and it is likely that dynamic will one day return but it is impossible to know WHEN.  Some exposure to international market for long-term growth investors probably makes since but one thing to keep in mind.  The benchmarks we use to measure long-term stock market performance here in the U.S. is generally based on the S&P 500, which is a U.S. based stock index.

In terms of the U.S. stock market, it has pulled back the last several weeks after a strong recovery rally that kicked off in February.  Many commentators have predicted a total collapse of the market any day and while that could certainly happen, so far U.S. stocks have held up.  One thing investors can do to potentially avoid sustained bear market declines is to deploy a simple timing based system.  I used one very successfully in 2008.

For example, downside volatility in the U.S. stock market the last 9 months has put my Adaptive Growth timing system in a transition mode.  Meaning, it triggered a reduction in risk last summer when markets started to fall.  You can see in the graph where the black line crosses below the blue line.  While the strategy is nearly fully invested now as a result of the black line moving above the blue line, some cash has been held back in case stocks do not fully escape the current correction.  The Adaptive Growth strategy is suggesting stocks remain in a transition mode and until they clearly move out of this status the strategy will remain a little defensive. 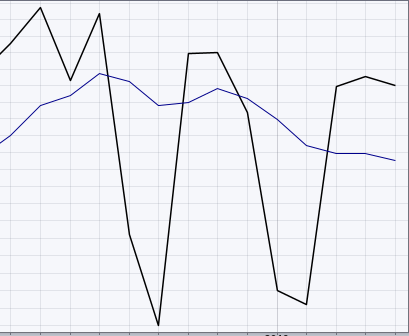 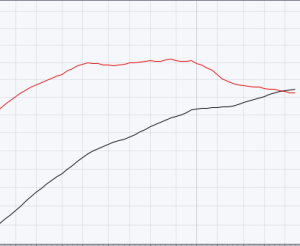 The Adaptive Growth strategy also incorporates another signal that has recently signaled a defensive move.  This is a longer-term trigger and suggests more declines may be ahead.  However, since the Adaptive Growth strategy is in a transition period I don’t have to take immediate action because I am already under invested and prepared to take further defensive action if conditions deteriorate.  If markets continue to rally I am already participating and ready to add more growth investments.  If a more conservative move is signaled here too I ready to take action.  This is not a purely mechanical system.  As I have described there is an element of interpretation involved but overall it is a pretty simple and straight forward system and I have been using it for years.

In terms of economic data driving corporate earnings, we continue to take two steps forward and one step back.  Most of the economic data suggests a mildly improving environment accompanied by an occasional disappointment.  The construction industry appears to be one of the primary contributors to current economic growth.  Both new construction along with remodeling appear to be helping companies like Home Depot  (HD) and material suppliers like Vulcan Materials Co. (VMC) perform well in this market. 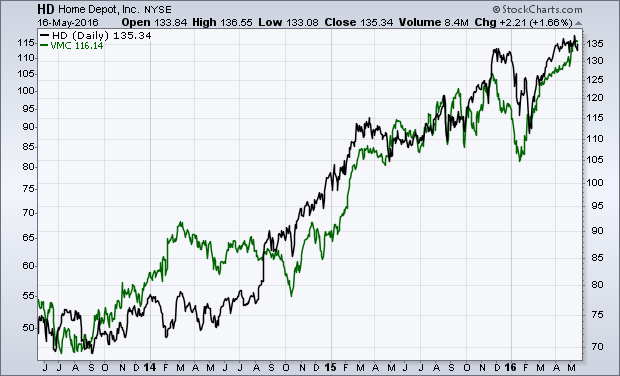 The chart of Vulcan and Home Depot show their prices rising steadily the last three years and near all time highs.  As both companies move into new high territory, along with many other stocks, there is reason to believe stocks could rally into the summer.  At least that is what is happening NOW.

In terms of new innovation, General Electric (GE) is busy reinventing itself and its latest announcement could be a game changer.  After trimming its financial unit and selling the home appliance division the company aims to leverage its massive industrial knowledge based by becoming an Industrial Internet Powerhouse, a new direction with potential promise.  Investor’s Business Daily details more here.  General Electric is not currently included in my favorite dividend stock investments but that may change if the new initiatives improve the company’s rank relative to other dividend paying stocks.  The real takeaway is this, despite all the challenges faced 124-year old companies like G.E., companies are finding ways to position their businesses for future growth opportunities.

Stocks had a great start to the week.  My favorite growth investment closed up 1.25% Monday.  This performance is so ironic.  Just this past Friday I was contemplating a short position for the Adaptive Growth strategy based on the ongoing deterioration of my second trigger measurement.  Just when you think it is about to get a lot worse it gets better which is typical in this market.  I have found this particular market environment requires a little more patience then usual.  Everything could change in the near future and I admit there are a lot of reasons to suggest markets are going to go through another correction.  However, markets have a tendency to do their own thing so a summer rally is not out of the question either.

NOBODY knows what tomorrow will bring and with stakes potentially higher than usual, based on risks that may have been introduced to the market by Central Bank intervention, using multiple strategies I believe is an effective approach for navigating the current uncertainty while positing for potential opportunities.

Have a great week!